Notes on 'The Evolving Self'
1: preface and prologue 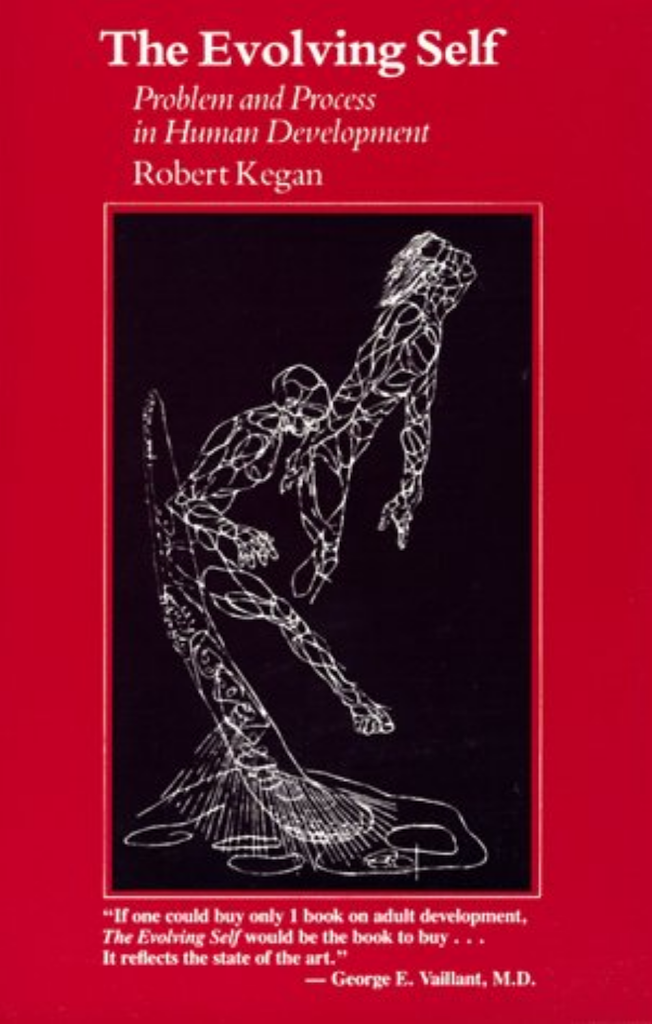 David Chapman posted a summary of Kegan's work relating his developmental stages to ethical stances in Buddhism. I made some notes when I was reading The Evolving Self, which I have made available in a series of six posts here. These notes give an impression of its tone and content but they are no substitute for the book itself, which I recommend. They're not even a summary, but they provide the basic structure of Kegan's stages and themes with their conceptual and psychological lineage. There’s a page on this site for each of the chapters from The Evolving Self. Click on the ‘Kegan’ category tag above to see an index of the pages. Here are my notes from the Preface and the Prologue:

The book sets a framework for personal development, which he will refer to as “the evolution of meaning.” There are two lineages of personal development that he will draw on: The first personal development lineage starts with Freud and descends through Erikson. It incorporates the capacity to unify experience and action in an adaptive manner. It is a lineage of “ego development”. The second lineage comes via Piaget, who is also an adapter within the first tradition. Kegan is highly influenced by Piaget and by the social cognitivists, particularly Kohlberg & his framework of moral development. Kegan was writing at a time of dichotomy and debate between psychoanalytic and cognitive-structural frameworks of personal development (early 1980s). “In this book all these questions get reconstructed by moving from the dichotomous choice to the dialectical context which brings the poles into being in the first place.” (Pg. ix.) That context is the evolution of meaning making. An example of his generous style: he ends the Preface: “In providing us with ‘data’ (literally, ‘that which is given’), [the people whose life experiences find their way into this book] make us gifted; in revealing their courage, they encourage us.” (Pg. ix.)

This is an overview of the dichotomous field of sociology and personal psychology within which he was writing at the time. He traces the then conflicting fields of Constructionism versus Developmentalism.

“The zone of mediation where meaning is made is variously called by personality psychologists the “ego,” the “self,” the “person.” (Pg. 3)

His unit of analysis is the person as a meaning-maker.

He recognizes crucial contribution from each of the traditions, yet all of them were in difficulty at the time of writing.

He nanes his own syncretistic approach Constructive-developmental: “It attends to the development of the activity of meaning-constructing.” (Pg.4)

This tradition had almost no influence on the then current practice of counseling and clinical psychology. He calls his approach neo-Piagetian.

On Rogers and the existential approach:

“At the heart of the lens we associate with Rogers is an existential approach to the metaphors of twentieth-century evolutionary biology. In contradistinction to earlier mechanistic and homeostatic conceptions, Rogers attends to what he regards as intrinsic processes of adaptation and growth.” (Pg. 4)

A first principle of the existential approach is the “actualizing tendency” of the organism to develop in self-maintaining ways – as expansions of effectiveness.

This approach is highly developed since Freud. Its central conviction is that personality development occurs in the context of interactions between the organism and the environment, rather than through the internal processes of maturation alone. (Pg. 7)

“The subject of this book is the person, where ‘person’ is understood to refer as much to an activity as to a thing–an ever progressive motion engaged in giving itself a new form…it remains that we are greatly tempted–and seduced–by our language into experiencing ourselves and the world as things that move…This book is about human being as an activity. It is not about the doing which a human does; it is about the doing which a human is.” (Pg. 7-8)

Constructivism – that persons or systems constitute or construct reality. Developmentalism – that organic systems evolve through eras according to regular principles of stability and change. Both hold a process of form creation – of forms ‘coming into being.’ Section on history of Constructivism, Pg. 9 to 13 (includes some famous figure/ground images like the old woman/young woman?)

“Human being is the composing of meaning, including, of course, the occasional inability to compose meaning which we often experience as the loss of our own composure…The idea that we are constitutive of our own experience crosses philosophy, theology, literary criticism, and psychology. In psychology it is an axiom of existential, phenomenological, Gestalt, Piagetian, perception theorist and Kelly-construct approaches.” (Pg.11.)

The Piagetian (epistemological) framework embraces “the scientific apprehension of meaning-making”. Kohlberg took the abstract notion of personal construction and embedded it in cross-cultural constructive-developmental predictive universals. But this misses the ontological significance of human meaning-making: “from the point of view of the ‘self’ then, what is at stake in preserving any given balance is the ultimate question of whether the ‘self’ shall continue to be” (Pg. 12.)

The Constructivist strands divide into non-reconciled reductionistic meaning-making on the one hand and “vague but richer conception of psychological activity on the other.” (Pg. 12.)

Developmetalism embodies the idea that organic systems evolve through “qualitatively different eras according to regular principles of stability and change.” (Pg. 13)

The shift into Developmentalism involves refocusing from entity to process, it’s a static to dynamic shift.

“In just the last 150 years… nearly every social and natural science has made this transformation from a taxonomic, entity-oriented perception of the phenomena of investigation to a developmental, process-oriented perception…” (Pg. 13.)

His aim for this book is to arrive at a metapsychology.

“A theory’s conception of equilibrium springs from its particular theory of biology, which in turn is related to its underlying epistemology. Any metapsychology [must be] more than psychological…” it must be biological and philosophical as well. (Pg. 14.)

This book “eventually suggests what the broader context might be. It articulates a framework for the study of that context, a framework which brings together the big ideas of construction and development. The constructive-developmental framework studies the phenomenon in nature I call the evolution of meaning. This book is an organized way of wondering what happens if the evolution of the activity of meaning is taken as the fundamental motion in personality.” (Pg. 15.)

There is a touching anecdote of his 6 year old daughter making sense of conflicting desires. (Pg. 16.)

“So many of the eliciting situations [that draw us to others] seem to harken back to the exigencies of this basic life motion, the activity of meaning and the threat of not meaning.” (Pg. 19.)

“It is never forgotten by teenagers…that greater than the inequalities of social class or achievement test scores is the unequal capacity of students to interest others in them– a phenomenon not reducible to social class or intelligence, and which seems to be the more powerful determinant of future thriving.” (Pg. 19.)

These are each meaning-making balances. Crises occur and precipitate transition (which can last for years) when context challenges the normative assumptions inherent in each balance. Contextual problems inform balances that ‘something is inherently wrong’ about the way one is viewing the world.

This leads to “a vacillation we will come to recognize as typical of transition”. (Pg. 41.) The vacillation is between accepting and questioning the supporting structures of the developmental stage.

“Eventually, preoperational children do evolve, constructing, as a result, a new organization of the physical world. And when they do, it is not because they have listened more carefully to tutoring grownups, or had it unfold within them like their developing physiologies, so much as it is because of their own activity in the world, evolutionary activity – an activity biologists speak of as the move toward the greater coherence of one’s organization. Robert White (1959) referred to it as ‘competence’ and I call it the evolution of meaning.” (Pg. 41.)

“No framework can hope to supply a theory of the developing person without some profound acknowledgement of our biological reality. Psychoanalysis provided one, and no framework since has offered an alternative vision with anything like comparable scope or plausibility.” (Pg. 42.)

In presenting such a framework he is, in part, seeking reconciliation between maturational and environmental interpretations of Piaget’s stages.

Activity of equilibration is central to the Piagetian framework: “Piaget’s principal loyalty was to the ongoing conversation between the individuating organism and the world, a process of adaptation shaped by the tension between the assimilation of new experience to the old ‘grammar’ and the accommodation of the old grammar to new experience…this conversation is not one of continuous augmentation, but is marked by periods of dynamic stability or balance followed by periods of instability and qualitatively new balance.” (Pg. 44.)

Seen ‘psychologically’ it’s about the development of knowing and experience. Each evolutionary truce strikes a subject-object balance. It becomes a way of knowing the world, but at the same time we experience this activity.

“Might we better understand others in their predicament if we could somehow know how their way of living reflects the state of their hoping at this depth? – not the hopes they have or the hoping they do, but the hopes and hoping they are?” (Pg. 45.)